Tara Betts is the author of “Break the Habit” and “Arc & Hue.” Her interviews and features have appeared in publications such as Hello Giggles, Mosaic Magazine, NYLON, The Source, Sixty Inches from Center, and Poetry magazine. She also hosts author chats at the Seminary Co-Op bookstores in Chicago’s Hyde Park neighborhood.
Publicado por Johanny Vázquez Paz en Saturday, January 11, 2020 No comments:

I Offer My Heart as a Target - Book Release Wednesday, December 4 at Women & Children First 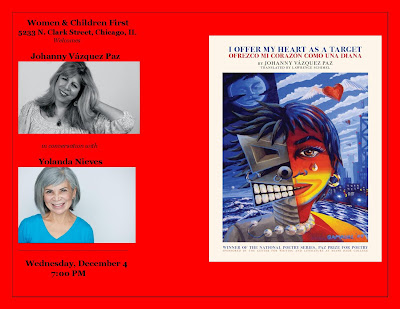 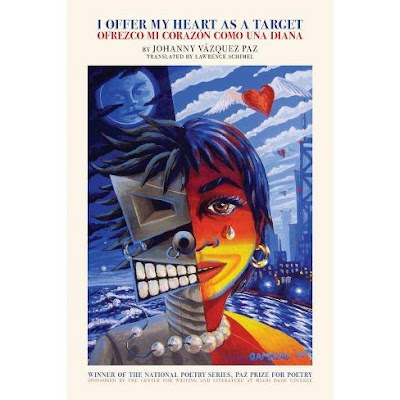 In the introduction to this piercing and timely exploration of gender, violence, and social justice, novelist, poet, and critic Rigoberto González writes: “The survivor speaks her truth, or rather, writes her way to truth as an avenue of expression.” As the book unfolds, readers witness the role of language in creating truth from a variety of aesthetic vantages, ranging from the philosophical to the image-driven: “To smoke in another language causes a cancer that spreads; first the lips, then the tongue,” Paz explains in “Diaspora of Words.” Throughout, she calls attention to language as a reason for those in power to exclude, and effectively disenfranchise, those individuals beneath them. Yet language also appears as a source of understanding, connection, and community: “We went to live to indulge the enemy/ to resist nights of storms and orphanhood to hear the silence of the lips/ sealed by the ignorance of the language.” To understand others, individuals must first learn how they organize, structure, and understand the world around them through language, Paz suggests. “Against all prognoses,/ we survive,” she proclaims in this moving book that, with Schimel’s skillful translation, highlights resilience in the face of oppression. 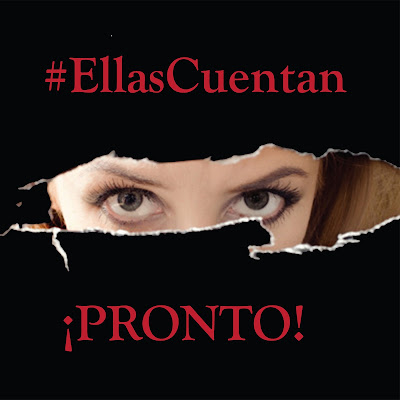 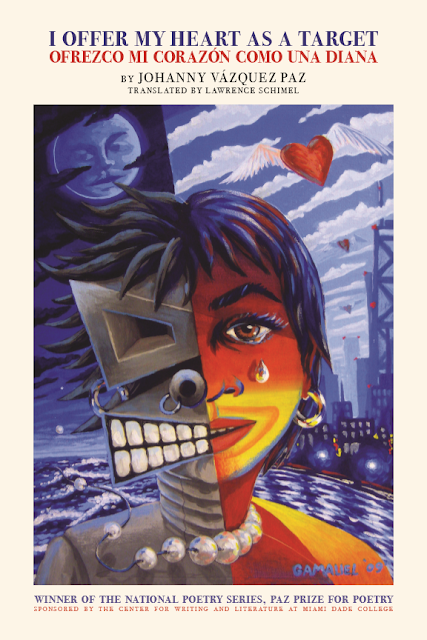 
Introducing the new winner of the Paz Prize for Poetry, given by the National Poetry Series, featuring an introduction by Rigoberto González, and presented in both Spanish and English.
Forthcoming: 12/3/19
From the introduction by Rigoberto González:
A regular heartbeat is composed of the two sounds made when the blood flows through the organ as the valves contract. To listen to its rhythm through a stethoscope is to appreciate the slight distinction between two movements that are unequivocally connected—one beat calls, the other responds. Similarly, the two sections of Johanny Vázquez Paz’s stunning book of poems offer the reader distinct tones powered by the same source: perseverance.
In the first part, the speaker declares herself a survivor. Her story is rooted to a violent landscape that some may call home, though for this woman home is a battleground, her body ravaged by war ...
The second part examines a much different challenge that presents itself to many immigrants: displacement. The speaker’s struggle to hold on to her past, indeed her history, via her native Spanish language is compromised by the pressures of assimilation . . .
Ofrezco mi corazón como una diana is a book of victory over silence and the truest testament to what it means to outlive that which has defeated or deflated many. If there’s a spirit guiding the courage embedded in its pages, it must be the Phoenix, the miraculous being that rises from the ashes reborn, or rather, pieced together again. The heart beats once more. The woman reclaims the word.

The Paz Prize for Poetry is presented by the National Poetry Series and The Center for Writing and Literature at Miami Dade College and is awarded biennially. Named in the spirit of the late Nobel Prize–winning poet Octavio Paz, it honors a previously unpublished book of poetry written originally in Spanish by an American resident. 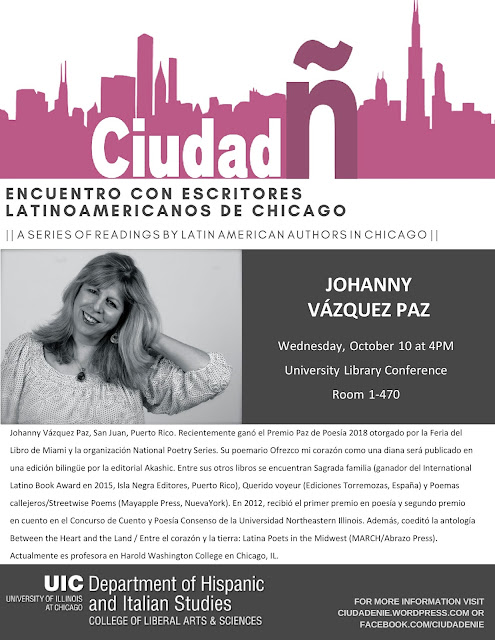 The National Poetry Series is pleased to announce the 2018 Paz Prize for Poetry winner, Puerto Rican poet Johanny Vázquez Paz for her manuscript Ofrezco mi corazón como una diana. The book, selected by judge Rigoberto González, will be published in both English and Spanish by Akashic Books.
“This collection of poems, strong and seductive, centers on the bewilderment created by the body, memory and history,” Gonzalez said. “By visiting these sacred spaces, Johanny Vázquez Paz offers solace for the conflicts that plague our interior and exterior sceneries. As violence diminishes the female spirit, this poet’s courageous, masterful command of language reunites fragments to make something whole.”
Paz was born in San Juan, Puerto Rico. Her books include Sagrada Familia, which won an International Latino Book Award in 2015; Querido Voyeur by Ediciones Torremozas (Madrid, Spain, 2012) and Streetwise Poems/Poemas callejeros (Mayapple Press, 2007), a winner at the 2008 International Latino Book Awards (California). In 2012, she won first prize in the poetry category and second place for her story “La muda” (The Mute) at the Consenso Short Story and Poetry Contest of Northeastern Illinois University. She co-edited the anthology Between the Heart and the Land / Entre el corazón y la tierra: Latina Poets in the Midwest (Abrazo Press). Her work has been included in many anthologies, including City of Big Shoulders; Ejército de rosas; En la 18 a la 1; The City Visible: Chicago Poetry for the New Century; and Poetas sin tregua – Compilación de poetas puertorriqueñas de la generación del 80. She currently teaches at Harold Washington College in Chicago, IL.
“It is an honor to receive the Paz Prize for Poetry and become the first Puerto Rican to obtain this distinction,” Paz said. “It’s also very special to receive a prize that carries my mother’s last name. With Ofrezco mi corazón como una diana, I hope to give a voice to the Puerto Rican diáspora and offer consolation to the victims and survivors of the violence we live in today. I’d like to thank Rigoberto Gonzalez for trusting my poems, the National Poetry Series and Miami Book Fair for promoting and supporting Spanish-language authors in the U.S.”
https://nationalpoetryseries.org/johanny-vazquez-paz-awarded-2018-paz-prize-for-poetry/ 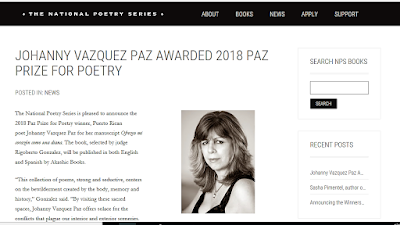 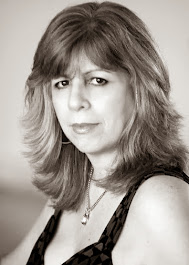 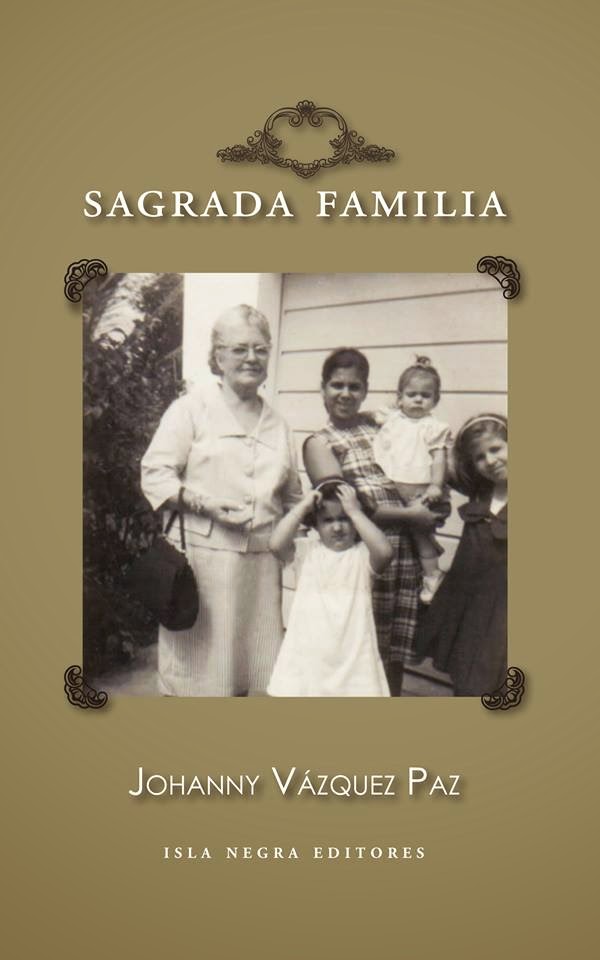 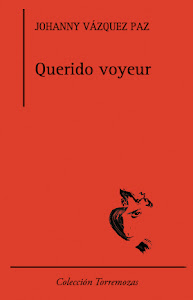 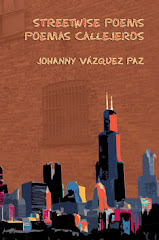 Get Streetwise Poems / Poemas callejeros at

Between The Heart and The Land / Entre El Corazón y La Tierra; Latina Poets in the Midwest 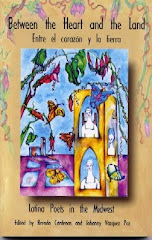 Get Between the Heart and the Land / Entre el corazón y la tierra: Latina Poets in the Midwest at 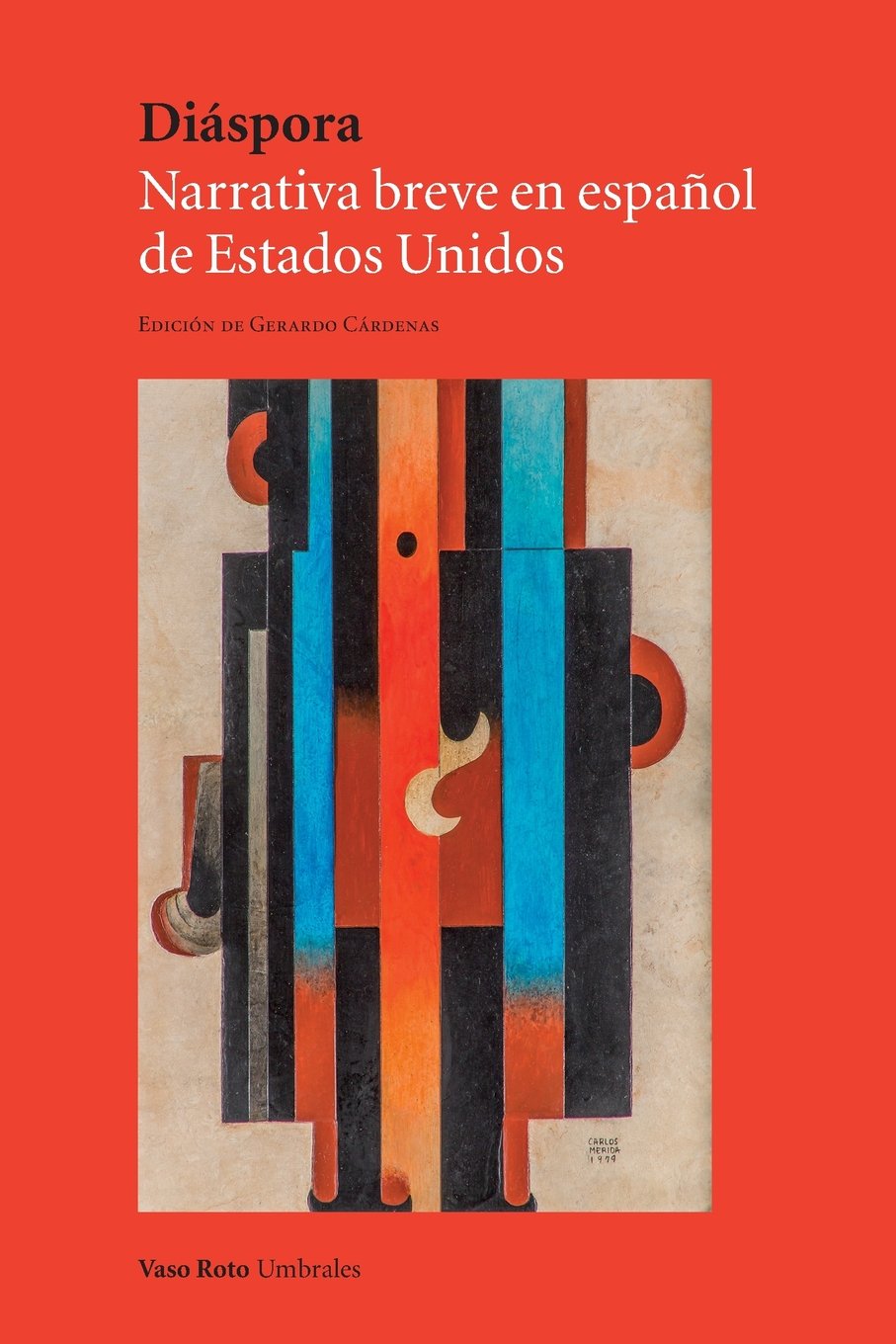 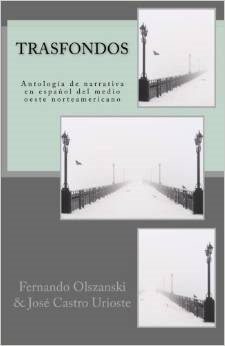 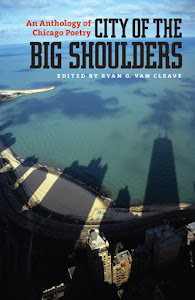 An Anthology of Chicago Poetry 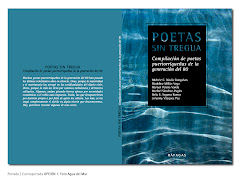 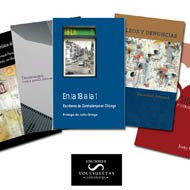 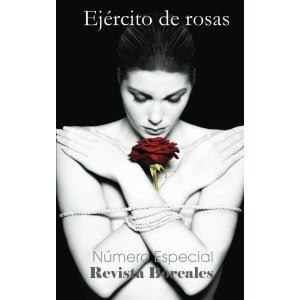 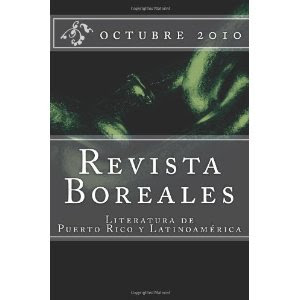 The City Visible: Chicago Poetry for the New Century 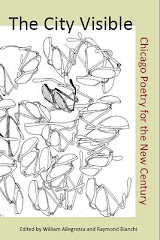 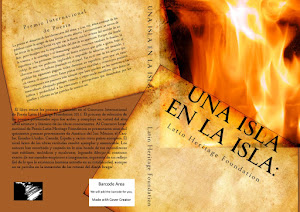 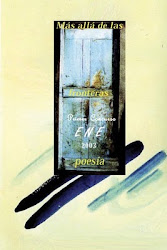